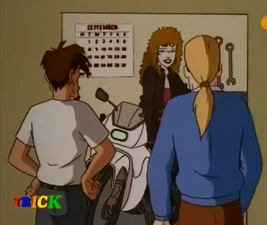 As every good EGB fan knows, Eduardo lives in a small apartment above his brother Carl's garage.  We glimpse the exterior in episode nine, 'Killjoys', and learn all about it in episode thirty-five, 'Rage', when Egon comes to stay.  This is my (joint) favourite episode of EGB, as we learn so much about my favourite character, and the apartment location gives a fascinating insight into Eduardo's lifestyle.

I got the urge to create this page whilst working on Jake's and my spin-off series The Riveras, for which both the house and the apartment are very important locations.  It seems I've had a lot of time on my hands, as I have made as detailed a plan as I could of Eduardo's apartment.  I'm no architect, but hopefully you get the idea.  Underneath the plan is proof of its accuracy (with the exception of the basin, which does not appear onscreen), with a few comments in which I share those fascinating insights I mentioned. 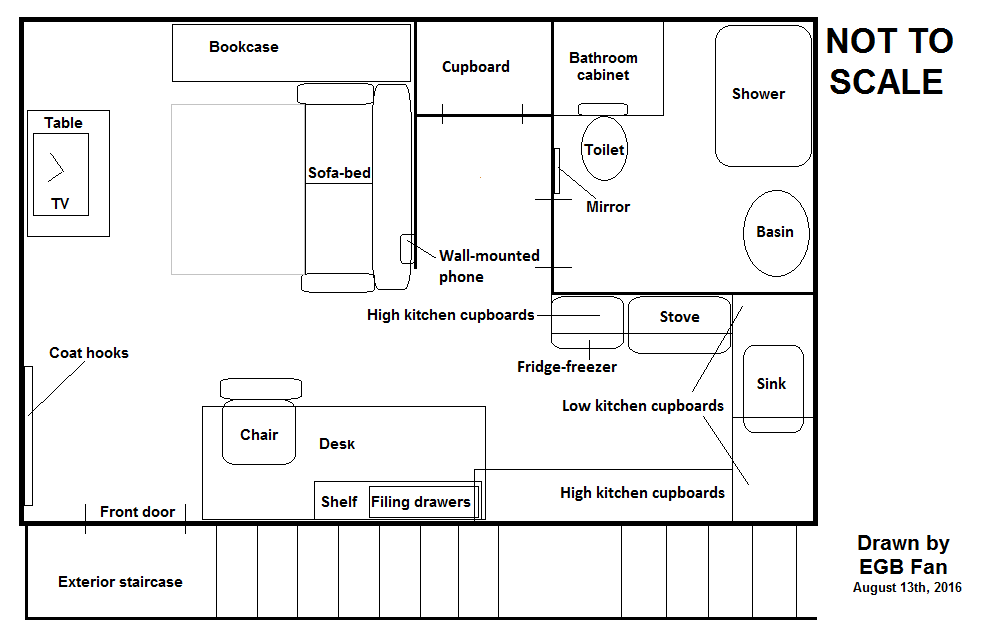 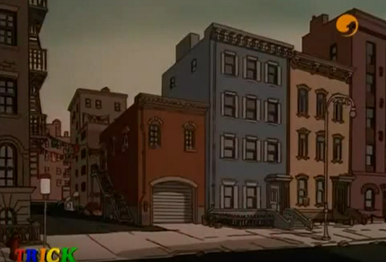 Look very closely, and you may just see some bin bags underneath the staircase.  Jake made use of this location in the virtual season episode 'Back in the Picture, Part 1'.

The house on the right surely belongs to Mrs McCluskey, as this is the first person Beth thinks of when Kylie mentions 'your neighbour'.  This would indicate that she lives alone over her three storeys, though she probably once had a family there, being a Mrs.

Carl and Beth's house seems very big for a family of three (as Jake points out, it's the same height as the high-rise behind it!).  It's difficult to imagine everything they might have behind those windows, though I do suspect the top floor is an attic. 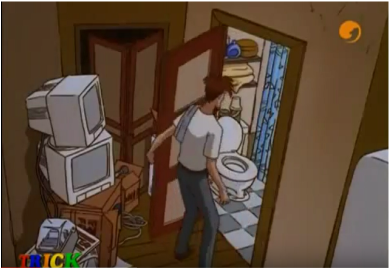 Eduardo presumably keeps his clothes in that cupboard, as well as anything else the viewer might imagine he needs that cannot be seen on-screen.  I can't think why he has computer monitors around the place, nor the microphone; as Jake points out, those very well might belong to Egon (you'd think he could have left some of it in the firehouse when it was being fumigated, wouldn't you?).

The fridge-freezer is just visible in the bottom right corner of this image, thus proving the accuracy of the floor plan above.

Notice the box of floppy discs and wallow in the nostalgia!  Of course Eduardo would have these, being a college student.  We always got through plenty because they would inevitably become corrupted.  Could it be that he is more dedicated than he appears...? 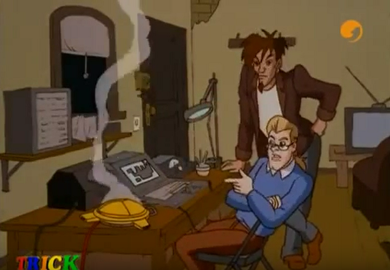 This image has a lot of interesting details, including Eduardo's filing drawers, which may suggest he is secretly very organised.

Behind him are the coat hooks where we see Eduardo find Slimer hiding inside his jacket, presumably to avoid Beth and Kevin, who have just left.

Also visible is the edge of the sofa that pulls out into Eduardo's bed.  Egon must be going to sleep on a mattress on the floor, which perhaps Eduardo keeps in that cupboard of his.

The wallpaper is peeling in the top corner by the front door, and other angles show more of the same sort of thing.  Once Carl arrives on the scene, we can see why landlord and tenant haven't come to any arrangement about tidying the place up a bit. 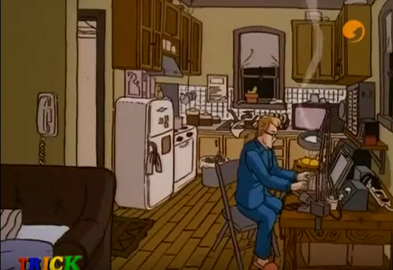 Here we see Eduardo's desk and sofa-bed from another angle, the kitchenette and a bit of the bathroom doorway.  Some might expect a young, single guy like Eduardo to have a backlog of washing-up, and shots of his sink show that these people would be right.

He also has a cactus on the windowsill, and some kind of chart on the wall; one could imagine that he uses this to plan his meals for the week, or to write his shopping list.  It's too small to be his sexy calendar; I'm afraid it isn't clear on which wall this can be found!  Egon is ready for bed, but as you can see, it still isn't clear where he's going to sleep.

I wonder what's in those boxes under the desk.  It's quite likely that Eduardo would have more stuff than there's room for in the apartment, as stated in The Riveras episode 'Milestones', but then after this was written, Jake realised that maybe they were supposed to contain Egon's stuff.  Well, either interpretation seems perfectly valid. 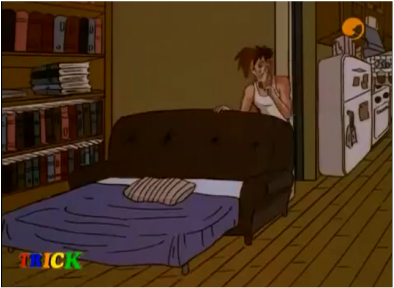 Clearly!  In longer shots of this area, the bookcase disappears, but there can be no denying it was once there.

The cuboid objects on top of the fridge-freezer look like cereal boxes to me right now, but at other times they too look like books.  If the latter impression is the correct one, then they're probably cook-books; students often have these, after all.

Eduardo also seems to have little notes on his freezer, and quite a big one on the fridge.  I suppose they could be cuttings from Playboy or something, but equally they could be useful reminders to help him organise his life (in place of Roland's electronic planner etc.; weren't the '90s wonderful?).

Note that Eduardo is preparing to go to sleep on screen right of the bed (which we later see him doing) while, conveniently for future arrangements, Kylie sleeps on screen left.