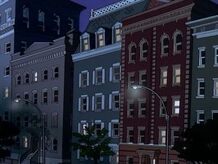 Unlike with Eduardo's apartment, we don't get a clear view of the layout of Kylie's place.  Pathetic as I am, I've sometimes wondered exactly how her life fits together in her open-plan loft apartment, the exterior of which you can see in the image on the left; that is her light coming from the top three windows of the central building.  'Darkness at Noon, Part 1' and 'Be Careful What You Wish For' offer glimpses of Kylie's apartment from a few different angles, but don't show how they fit together.  What I have now done, then, is to piece together what I have seen into a plausible layout for the apartment.  As I said the last time I did something like this, I'm no architect, but hopefully I can give you the basic idea.  Unlike Eduardo's floor plan, the one I have drawn for Kylie is not confirmed in-show, and in fact the bathroom is entirely a product of my own imagination (she must have one, though).  All the same, I have made the plan as accurate as I can based on the available evidence, and my thinking is reasoned out below.

'Come give your granny a hug...'
​​​
These images from 'Darkness at Noon, Part 1' show the position of Kylie's bed in relation to the windows, radiator and window seat, the lower of the nightstands I have drawn (plus lamp) and a wall which has the TV table against it.  I'm disregarding the exact position of the three windows, for which Eduardo's apartment sets a precedent; they definitely, definitely​ do not match the exterior!  One of my thoughts was that the space didn't look long enough to occupy the whole length of that roof (despite the windows; just forget them!), so it only made sense to me that this wall was the bathroom wall.  Upon closer inspection of the ceiling beams, the back one seems to stop short of the front one, therefore taking that area further back into the apartment and thus supporting my bathroom theory.

The other nightstand is briefly visible in this episode as a slightly-too-tall (for my purposes, anyway) chest of drawers; I've gone with the version in the picture on the right, which is about the only thing we see of Kylie's apartment in 'Grundelesque', complete with telephone.  I like to know where she keeps her phone, and I also like this shot because it allows me to argue that Kylie sleeps on screen left of the bed while, conveniently for future arrangements, Eduardo sleeps on screen right. 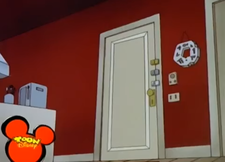 The kitchenette, entrance, stairwell and full-length mirror were figured out to the best of my ability from Pagan/Eduardo's view of the room in 'Be Careful What You Wish For'.  The writers may not have realised the apartment was open-plan when they had Eduardo realise he was 'in Kylie's bedroom'; in fact, her bed is about the one thing he doesn't see!  Still, he's not wrong; he is very much in her private abode, and her bed is surely not far away.  Meanwhile, here's the entrance, with what looks like another door to screen right; I thought it only made sense that behind these doors were the stairwell (duh) and some eaves storage respectively.  To the left of the front door is, of course, a tantalising hint of kitchenette.  This is not visible in the first appearance of the apartment, and nor are those doors, which turned out to suit my floor plan in the end...

'Did you just call me sweetie?'
The mirror gave me some trouble.  First it was difficult deciding which wall it should go on, and then I noticed there was a desk or table under it, which needed adding after I thought I'd finished the plan.  It simply cannot be the same table that Kylie keeps her TV on; it just isn't possible.  Nowhere could I see what might be a bathroom door, so I've put the bathroom where I ascertained it to be in 'Darkness at Noon', and worked the mirror, desk, kitchenette etc. around it.  Then, returning to 'Darkness at Noon', I see that I was right! 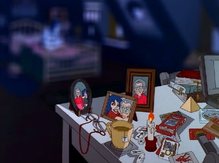 'Spirits, if you're out there tonight...'
The image to the left assuredly depicts the same Grandma Rose shrine we see in the above image from 'Be Careful What You Wish For' and thus supports my positioning of it, and of that bathroom I am so keen on; Kylie's bed, window seat and heater are out of focus for the introductory shot of the apartment, but there they are all the same, in the position my floor plan would have them.  Kylie displays various pictures all over the apartment, both on walls and standing up in frames.  There is no way I'm marking any of her pictures, runes etc. on the floor plan; some of them it's obvious where they are (on the desk, for instance, and the runes between the two doors), some of them it's not obvious at all, and one or two of them I might even have substituted with a door.  Still, despite all the tricky bits, I think my plan is more than feasible; in fact, I don't think there is any alternative that would make as much sense from the available evidence!